When hiking the trails at Cameron Lake, on Vancouver Island, I came across several old cabins which made me pose the questions:

Would you enter?
Or dare peek inside?
Uninvited?
Today?
Even if you knew that hauntings, the ghost of Grandpa Bonney, the Cameron Lake Monster and Sasquatch sightings have all been reported in this area?
Even if you suffered from Friggatriskaidekaphobia?

Cameron Lake is surrounded by McMillian Park, lush with towering ancient Douglas Firs and Western Red Cedars. Overlooking the lake you will find train trestles with wooden platforms. The trestles, now inactive, boast an incredible history and stand as an iconic landmark. Sitting on the lake, below the trestles, are several cottages originally used by the workers who maintained the railway and safeguarded it from fire. The cottages since have been passed down to the families of these workers.

Cameron Lake has repeatedly been at the center of much intrigue and fascination. In addition to what has been mentioned above, there have been several mysterious events, often retold by locals. These occurrences include the crash of a small plane (1968) where the wreckage (still containing the remains of the four passengers) was not discovered in the lake’s waters until fifteen years later. (Additional Sources: 1, 2). There have also been unsolved reports of a three-foot monkey appearing in people’s driveways just a few kilometers away (despite no one in the area known, or licensed, to own such an animal). And then there are the stories for which I could find no shred of substantiation (other than to confirm that these stories do in fact exist). These include tales of a train wreck that supposedly lies at the bottom of the lake and has never been recovered.

Earlier this week, my husband and I donned our hiking boots and rain gear (it is Vancouver Island after all) and set out to capture a few extra photos for this post. The dark skies and drizzle were perfect for the photos that I had in mind.

When we first arrived along the shore, lined with small cabins, our eyes were immediately drawn to a string-bikini-clad bather. She seemed to be having her own photo shoot on the floating dock of one of the cabins. Before you begin imaging a warm climate, it was four degrees Celsius with a stinging rain. To my husband’s chagrin, I resisted the temptation to sneak in a shot of the event.

As we continued along, Cameron Lake did not disappoint and held fast to its reputation for giving cause to wonder. Does that not oddly look like some kind of monkey king deep in that tree? (Ninth photo, no special effects.) And look! There’s a strangely elongated face high on the other trunk! (Tenth photo, again no special effects.) Well, I might as well roll with the fun and get a shot of Grandpa Bonney himself…or the closest stand-in that I could find. (Eleventh photo…special effects may have been used!)

Happy Friday the 13th everyone!!

________
This post has been written for #ThursdayDoors, a weekly blog link-up hosted by Montreal blogger/photographer Norm Frampton at Norm 2.0. Why not check out the other ‘door’ postings…safe from the inside of your home?! 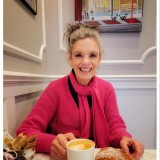 Prior to retirement, I lived and worked in Beijing China for fourteen years (Middle School Principal/Deputy Director at The Western Academy of Beijing). Leaving international life behind, my husband and I retired to Vancouver Island in June 2015. To document both this transition and our new adventures, ‘Retirement Reflections’ was born. I hope that you enjoy reading these reflections, and will be willing to share your own.

What a fascinating post, Donna! The stories are great, but what really makes this piece are your photos. As you said, the dark skies, rain and, I’d add, your perspective in shooting them, contribute such richness to the tales. I would indeed be afraid of opening a few of those doors.
Not so though the tree. I love the tree with its huge opening. Did you go inside? Could you stand up?
Happy Friday the 13th to you too.

Hi, Karen – You already know me well! Yup, I stood inside the tree trunk (and did not need to crouch at all). Thanks for commenting, and for your kind words.

Sounds like your walk in the rain was a delight!

Thanks, Pat – The walk was so enjoyable that I went back a few days later, without taking photographs, just to enjoy it!

A bit creepy, but very intriguing. I’d like to have a peek inside those cabins. How else will I find the monkey or the grandpa?

I LOVE your adventurous spirit, Liesbet. Happy Friday the 13th!

Happy Friday the 13th! I happen to think 13 is a very lucky number 🙂

It is so much fun to wrap a playful story around a trip into nature and all the local legends. Nicely done! The last photo is my favourite :D)

Thanks, Joanne – My husband almost vetoed that last photo. Ultimately, he is an extremely good sport!

Interesting building! Are they all abandoned?

Thanks, Kate – I believe that they are still occupied for the summer months by the families of the original railway workers/firemen. We did peer inside but didn’t see any signs of anywhere being there more recently (except for the bikini-clad-bather of course)!

Hi Donna! And great photos. They do look spooky in the mist! I have always thought of the 13th as a “lucky” day because my mother was born on the 13th. 🙂 But I am reminded of how cold it can be in that dampness. We lived in Colorado for a few years and it got very cold there but the coldest I think I ever was was visiting WA for Christmas one year. Bone-biting cold for sure. That’s why I live in the desert southwest. Stay warm! ~Kathy

Ironically, this area is known to be have one of the warmest winters in Canada. That is why so many retirees move out here. Unfortunately, the past two months have not been a great example of this. Thanks for commenting!

Well lots of spooky to be found here! Great gallery of photos. As to would I have a look inside I’d be more worried about the trespassing then what I might find. Such a rule follower. Happy Friday the 13th!

Hi Sue: Thanks for commenting. Does it help if I knocked first?

Your expression on the photo showed your feelings exactly. Richard seemed to be a little bit calmer than you, with his eyes open only , mouth closed:)
Please be very careful for your adventure. I even heard some islands may have bears.

Hi, Aiqin – We definitely have bears all around us on Vancouver Island…and cougars! When are you coming to visit?

Some spooky photos. I might take a peek inside the old cabins, but I sure as heck wouldn’t go swimming in that lake!

But ‘Polar Bear Swims’ can be fun! Are you sure you don’t want to give it a try??

It looks like so much fun especially on Friday 13th. Great photos too!

Thanks, Debbie – It definitely was fun. (Wet, but still fun!)

Spooky! I would have definitely gone inside the cabins… if I knew nobody lived there. Great photos and fun post! The idea of swimming in the cold lake – in a string bikini no less – is simply frightening!

Funny, Tom wasn’t interested in a winter dip either! But I do love your spirit of adventure to peek inside the empty cabins!

Certainly reminds me of the ‘Friday The 13th’ movies, Donna. It was the first horror movie I saw at the cinema and the ending has always stuck in my mind. Thank goodness it was daylight when you took this tour.

Hi, Hugh- Thanks for stopping by and commenting. You are right…I definitely wouldn’t have taken this visit in the dark!

Yes isolated cabins in the woods can be scary but not enough to keep me away.
Some nice shots in this collection 🙂

Thanks Norm. You should consider a trip to Vancouver Island (for door research purposes, of course)! Or have you already been here?

A fun hike and entertaining story!

Thanks, Anabel! With all of your travels have you done any hiking in British Columbia yet?

Wow! I’m glad you survived to do this post. 🙂 I wouldn’t go in a cabin uninvited unless it was for survival, but I might peek in a window. As for Frigga, my lucky number is 13 so Friday the 13th is my lucky day. 🙂

Thanks, Janet – Since our survival was not at stake (at least as far as we knew) we did not enter any cabins…but we did peek in a few window. I hope that you had a great Friday the 13th!

I have always loved the paranormal (not the Jason-scare-the-S**t-out-of-me kinds) shows and stories. Legends are born out of these types of events you describe! Your photos do indeed set the creepy mood! Great post for Fri the 13th!

Hi, Terri – I am totally with you on not being a fan of Friday the 13th horror shows. But local legends of mystery, suspense and intrigue….count me in!

I have always been greatly interested in discovering cabins in the woods and exploring ghost towns on hikes. Where I grew up as a child, there was a section of the telegraph trail (developed during the gold rush) that went through the area. I remember seeing old wagon wheels in the bush alongside the trail.

But, are you sure that the bikini bather was not a paranormal illusion???

Good point about the bikini bather, Jude! I never thought of that!
(: